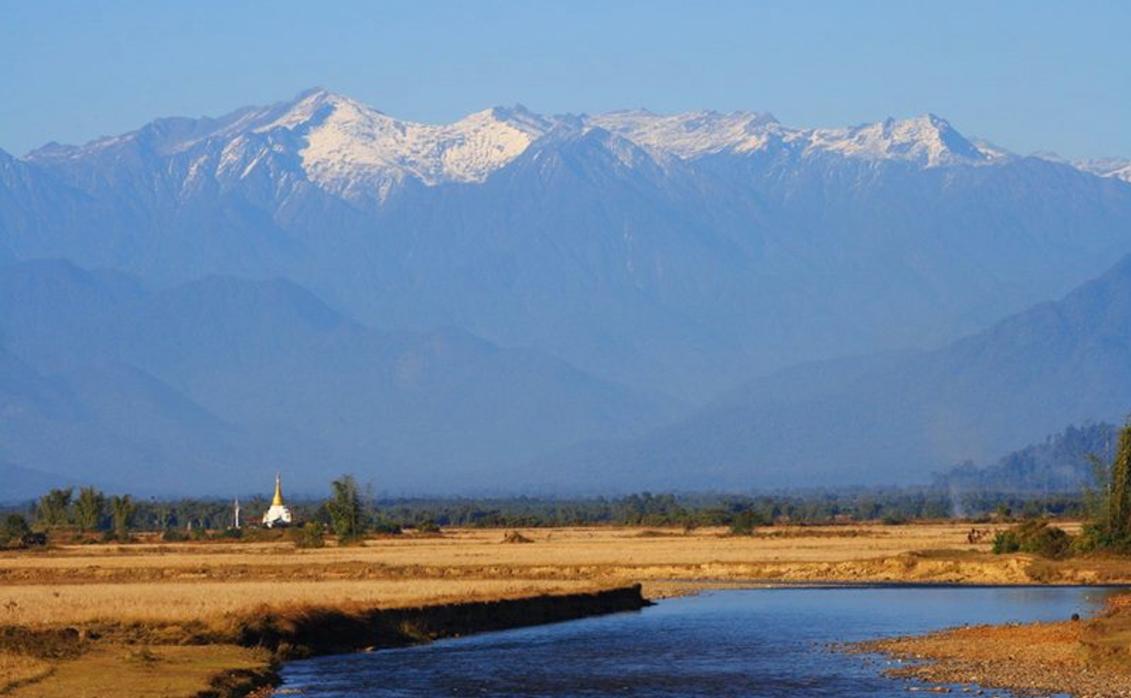 What can we say about a place that has such breathtaking beauty, but in an instant can extinguish life using its terrain and weather? And what sort of resilient and resourceful people manage to thrive here?

The Putao valley is just above 27 degrees north latitude, in the southeastern foothills of the Himalayas. At some time during the last ice age, the valley was under a glacier, and the rocky soil shows the results. It is bound on the east side by the Mali Hka river, and to the west and south by the lesser Nam Lang and Nam Htum rivers.

North Kachin State has its own microclimate, and Putao's is quite cool, almost freezing in the mornings, -from November through late February. The rest of the year it seems like if it's not raining at the moment, it will be starting to any minute now...Still, a good part of the open valley is not under cultivation, largely due to lack of irrigation. The north end of the valley gets enough water to cultivate several hundred acres of rice. Away from the valley proper, most of the rice grown is the uplands dry daungya-type. Most families have large kitchen gardens providing everything wanted for the table that can't be traded for with neighbors. Oddly enough, among some of the surprising things grown are real English watercress, Szichuan peppercorns, and Scotch Bonnet (Habanero) chilies. These were no doubt introduced by homesick colonial officers during the Raj days.

But most eye-catching are the large stands of citrus trees growing here, there, and everywhere; the Morse family of American missionaries arrived in the 1940's, and during their tenure they introduced as many as 50 varieties of heirloom citrus, including the full arsenal of grapefruits, tangerines, kumquats, and lemons-limes. For the moment most of the fruit stays in the valley, only making it out on grossly over-burdened passenger airplanes, or in the backs of 8-ton trucks; the city of Myitkyinaa inhales whatever citrus fruit makes down over the 300 miles of horrible road, and the precious cargo arriving in passenger's baggage in Yangon is pretty much spoken for on arrival.

The river bottom land has soil that is rather acid, and as it happens, the trees that produce agar wood prefer this sort of growing condition. As the areas closest to rivers are also heavily forested, the additional requirement for shade for seedlings is met, allowing immature Aquilaria saplings to get a start on life.

There is plenty of room to argue over who arrived in Putao first. Strong arguments are for the Tai peoples finding the valley during the migrations from present-day Yunnan, which occurred in the 1200's. It seems a sizable group took a right turn heading south and settled in the valley which they named Hkamti-Long, a name which sticks to this day. There is a good-sized community of Shans living in the valley who form the vestiges of the original Tai settlers.

Most agree that Rawang peoples started to settle in the valley about 800 years ago, followed hundreds of years later by the Lisu, and thence by the ever land-hungry Jinghpaws. Still, Putao district is regarded as the ancestral home of the Rawang.

Not until 1911 did the British move into Putao valley, and then only in response to fears that China would try to annex it to Yunnan province. Named "Fort Hertz" in 1915, it was the only corner of Myanmar still firmly in friendly hands when WWII started, and from a base in Sumprabum Township, the American OSS Detachment 101 started its guerrilla campaign against the Japanese.

Since insurgency began in Kachin State in the late 1940's, Putao district has been largely isolated from the rest of Myanmar. Although the government is making strides towards making the 300 miles of road to Myitkyinaa passable year-round, we don't look for it to remain open during the monsoon season, and access by land ceases from June through October. Daily flights by multiple airlines keep Putao's inhabitants supplied during the closed season, but only with low-volume sundries that they cannot produce themselves.